Broad mites and hemp russet mites on your cannabis leaves are so tiny they are practically impossible to spot with the naked eye, and still very difficult to see under a microscope. Broad mites are more common than hemp russet mites but the symptoms and treatment are pretty much the same for both.

With broad mites or russet mites the new growth may be twisted, blistered and “wet” looking. If your plant is flowering the buds may turn brown and die. 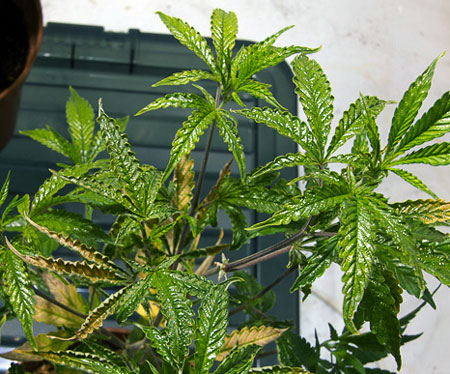 Edges turn up as if the plant is suffering from heat stress, but with broad or russet mites the leaves take on a glossy, almost plastic-like appearance. Eventually affected leaves turn yellow or bronze and die. The main way to spot an infestation is the damage they leave behind because usually the mites themselves are too small to see. They like to hang out inside crevices of leaves and in your buds themselves, and lay eggs inside the plant so you don’t see them.

Sometimes the symptoms can be confused for tobacco mosaic virus. Leaf symptoms from broad or russet mites are also commonly misdiagnosed as over watering, a nutrient deficiency or heat damage.

One of the biggest reasons broad mites and russet mites can be so difficult to diagnose is you rarely see any signs of bugs, and you don’t see bites on the leaves. For many people, they don’t even realize a bug infestation is happening.

Sometimes top leaves droop. In this pic you can see that part of the droopy leaves are getting that blistered, wet appearance from broad mites. Sometimes one of the main symptoms is the newest growth is coming in twisted

The following marijuana plant has been treated for broad mites and is starting to recover. You can see the newest growth looks matte and healthy, while the damaged leaves from before still look glossy and blistered. It’s great if your plant is starting to look healthy again, but even if your plant appears to be recovering, don’t stop on weekly treatments for at least a few weeks. The broad mites could still be there waiting to take over the plant again! They are the masters of hiding and waiting.

Unfortunately, broad mites are probably one of the hardest marijuana pests to get rid of. They lay their eggs inside the plant which makes it very difficult to kill their eggs!

Solution: How to Get Rid of Broad Mites On Cannabis

Once you’ve actually identified that the bugs you have on your cannabis are broad mites, it’s time to get rid of them! When it comes to broad or russet mites, a lot of the “standard” miticides are not as effective and you’ll notice these particular mites aren’t listed on the labels.

Broad mites can be one of the toughest marijuana pests to get rid of, but it can be done if you stay vigilant!

Neem Oil will leave an unpleasant taste/smell on buds when used to treat flowering plants, so again, don’t let this stuff get near your buds! There’s also some evidence Neem oil may be harmful to humans so use with care! That being said, Neem oil is an all-natural remedy that is very effective against many different types of bugs and mold, including broad mites.

Neem oil can be rough on your plants so you don’t want to use it more often than you have to because your plants will suffer. However, if you get desparate treating plants daily with Neem oil is very effective at killing broad mites when nothing seems to be working.

You will need a mister (also called a “One-Hand Pressure Sprayer”) to spray all the leaves evenly, since neem oil and water can separate easily.

Essentria IC3 Insecticide is a mix of various horticultural oils that is organic and safe for humans. It is often marketed as a “bed bug killer” but it can be effective against broad mites or russet mites when the plants are treated regularly. Unfortunately it only stays effective on the plant for about 8 hours so you will want to either apply this daily or combine with other options. You will need a mister (also called a “One-Hand Pressure Sprayer”) to spray all the leaves evenly.

Fatty acid salts or insecticidal soaps can be a good choice against broad mites. They weaken the outer shell of broad mites but are safe to use on your plants and they don’t leave much of a residue which could kill beneficial bugs in your garden.

With soaps, just like horticultural oils, coverage is very important as it does not stay on your plant for long, so follow-up applications may be necessary. Although this is considered safe, avoid getting any on your buds!

This will not get rid of broad mites on its own, but it is less harsh on your plants than some of the other options and so it can be a great way to supplement the other treatments you’re doing.
4.) Mighty Wash

Mighty Wash is a time-tested way to rid your grow room of broad mites. Spray plants 15 minutes before lights out, making sure to drench the foliage under the leaves as well as the top of your soil. You want to use a spray bottle or mister. Use a fan to blow on your leaves to help things dry. Treat your room more than once, even if you believe the broad mites are gone.

Use Mighty Wash with a One-Handed Power Sprayer for the best results!

Avid miticide is strong stuff with harsh chemicals, and is incredibly expensive, but it can sometimes do the job when nothing else is working. This is a systemic insecticide, which means it works by infiltrating the inside of plant tissue and killing bugs that way. Because of that it should NOT be using in the flowering stage (you don’t want this stuff inside your buds). However, many growers report that this is the only thing that consistently works for them. Always use Avid as directed and only as a last resort! You will need a mister (also called a “One-Hand Pressure Sprayer”) to spray all the leaves evenly.

Don’t use this product more than once or twice in a row or your mites may become resistant. This should stay in your plant’s system for several weeks. If you’re going to be using systemic insecticides, switch back and forth between this and another one like Forbid. Make sure to follow the instructions!

Forbid miticide is sort of like Avid in that it is made of strong stuff with harsh chemicals and is also expensive. This is a systemic insecticide, which means it works by infiltrating the inside of plant tissue and killing bugs that way. Because of that it should NOT be using in the flowering stage (you don’t want this stuff inside your buds). However, many growers report that this can be the only thing that consistently works for them. Always use Forbid as directed and only as a last resort! You will need a mister (also called a “One-Hand Pressure Sprayer”) to spray all the leaves evenly.

Don’t use this product more than once or twice in a row or your mites may become resistant. This should stay in your plant’s system for several weeks. If you’re going to be using systemic insecticides, switch back and forth between this and another one like Avid. Make sure to follow the instructions!

Diatomaceous Earth is basically fossil dust which you sprinkle on the top of your soil, and anywhere else in your room (window sills, doorways, etc). This powder-like substance is harmless to mammals and plants, but is incredibly sharp at the microscopic level. Therefore it will tear and dehydrate broad mites on physical contact. This will not get rid of an infestation, but can help prevent, control and slow things down when used effectively! When it comes to broad mites, you want to use every tool you can!
8.) Heat

Broad mites don’t like the heat. Some growers will try to get rid of them by on small plants or clones by dunking the plants in hot water (105°F / 40°C) for 10-20 minutes. I’ve also heard of growers try to reduce their number by overheating the grow space to 115°F (46°F) for an hour. Be careful as this can be dangerous if you don’t take safety precautions, and any heat method strong enough to kill the mites will likely hurt your plants.
9.) Predatory Mites

Some types of predatory mites, like Neoseiulus type mites, love to eat broad mites. Supplementing your garden with extra predators can help bring down broad or russet mite numbers. However, it’s not enough to fix the problem on their own and unfortunately a lot of the other remedies on this page will also kill predatory mites.